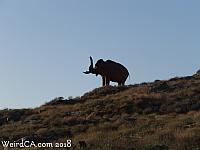 The mammoth on the hill in Jurupa Valley is so iconic it even appears on the city seal! 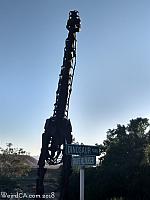 As you're stuck in traffic along Highway 60 east of Los Angeles, passing through Jurupa Valley, off to the North, you'll see a mammoth hanging out on a hillside. Yes, that's right, a mammoth, a Colombian Mammoth apparently. It's name is Eddy the Mammoth. Although hard to tell from the highway, Eddy the Mammoth comes in around two and a half tons, about 25 to 30 feet tall, 40 feet long, and is made of rusted iron metal. It was first put up on the mountainside back in 2003 and is on land owned by the Jurupa Mountains Discovery Center, for which it acts as a billboard or sign advertising the location. It has become so iconic to the area, that it even appears on the Jurupa Valley official seal. The mammoth even predates Jurupa Valley which was incorporated as a city on July 1st, 2011. 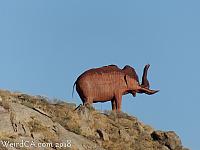 Eddy the Mammoth in Jurupa Valley 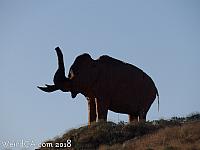 Eddy the Mammoth in Jurupa Valley

A dinosaur lurks in the foliage! 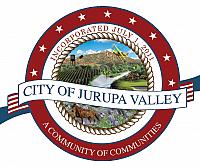 The Jurupa Mountains Discovery Center is a fantastic stop in the Riverside area. Consisting of a little museum, a gift shop, some gardens ranging from a biblical garden to a cactus / succulent garden, and even a dinosaur trail, it's free to stop and explore the area. Founded in 1964 it covers 82 acres. As soon as you enter the driveway, you'll run across your first metal dinosaur!

The museum has several fossils, an impressive collection of dinosaur eggs originally obtained from China, rocks, cultural artifacts, and other items on display. The biblical garden has a collection of plants and trees appearing in the bible. In the museum, there are two display cases filled with Franklin Rocks, which glow bright colors under UV light, named after Franklin, New Jersey, where they are often found. There is also an actual Camptosaurus skeleton there, on loan from the California Academy of Science. 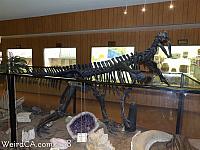 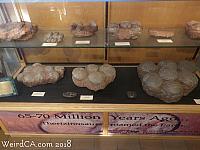 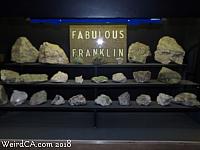 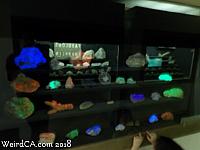 And then there are the dinosaurs. Some are made out of metal, others fiberglass. They appear throughout the center, but are mostly concentrated along the Dinosaur Trail, off to the left after pulling into the center's driveway. There is a giant brachiosaurus skeleton statue at the beginning of the trail, which is marked by a sign post. Along the trail, dinosaurs lurk within the cacti and succulent garden, with ten additional dinosaurs able to be found in an open BBQ area at the top of the hill. Two velioceraptors jump out of the cacti at you along the trail. Triceratops, stegasaurus, corythosaurus, a dimetrodon, a pteradon, and more than twenty dinosaurs in total reside along the trail or are located at the top area. A few additional assorted dinosaurs can be found throughout the center, including a couple near the entrance, and some over by the gift shop and museum. 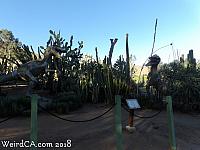 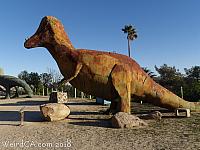 Dinosaurs on the hilltop 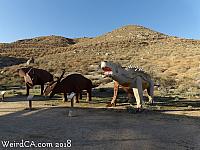 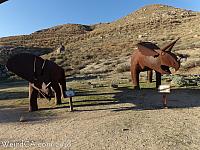 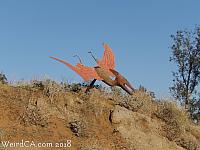 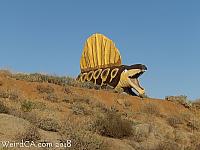 Dimetrodon on a hill 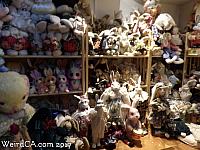 The Bunny Museum in Altadena

The gift shop has another dinosaur skeleton on display, several colorful murals, a large taxidermy collection, and even some terrariums filled with live creatures. Even the bathrooms are interesting. The one we were in, had dinosaurs drawn all over the inside of the bathroom, making for an interesting bathroom experience. Outside the gift shop is a live tortoise. 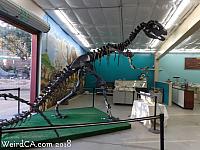 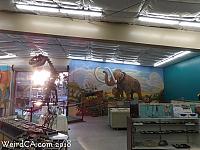 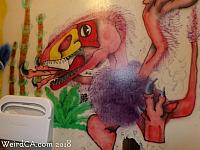 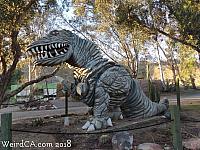 Another dinosaur near the gift shop

If you like walking through cacti gardens while being stalked by giant metal dinosaurs, Jurupa Mountains Discovery Center is for you!