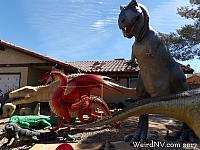 Shan-Gri-La Prehistoric Park aka The Dinosaur House in Henderson

If you're in Henderson and you see a large pack of dinosaurs hanging out in someone's front yard, then you've just seen the "Dinosaur House" also known as the Shan-Gri-La Prehistoric Park. With over forty dinosaurs and numerous other wacky sculptures, Shan-Gri-La Prehistoric Park is the creation of Steve Springer, who is now known as the "Dinosaur Man". He is a retired middle school English teacher who loves to bring joy to the over 15,000 visitors his Dinosaur House attracts every year! 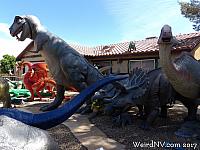 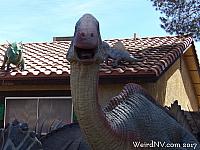 At one point the front of Springer's house didn't look like this. Instead it had unicorns, aliens and even a few yeti. But one day in 2005 he saw a dinosaur in a catalog and thus began Shan-Gri-La Prehistoric Park.

Now the unicorns and yeti are gone, having been replaced by hoards of dinosaurs! The main attraction is the giant Tyrannosaurus Rex in the middle of the yard, often seen eating something. He had a human hand in his mouth when I stopped by. The T-Rex goes by the name "Tex", is twenty-seven feet long from head to tail, and stands fourteen feet wide. In addition to the man eating T-Rex, there are triceratops, brontosaurus, a velociraptor, a dragon, a hadrosaurus, a stegosaurus, a dimetrodon, giant ants, large lizards, sea serpents, and a variety of other creatures. There are even four giant tortoises in each corner of his driveway, each probably weighing close to a ton. Baby dinosaurs, even some hatching from eggs can also be found on the front yard. 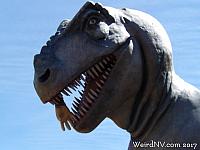 The T-Rex was hungry! 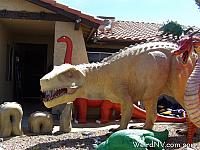 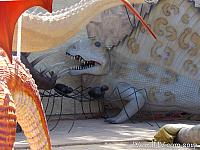 Neighborhood kids, tourists, and organized school field trips are part of the thousands of visitors the Dinosaur House has each year. In 2013 he even had a surprise wedding party show up from Illinois, get married, and pose briefly in front of his yard. Springer decorates for the various holidays. For example, the yard is lit up red for Valentine's Day. Halloween is a big event bringing in over 2,500 trick or treaters.

The Dinosaur Man carries small plastic dinosaurs in his pocket too, giving them out to both visitors and people he runs across while out. His car's license plate is "DINOMAN" and his car is all done up with dinosaurs painted on it along with "Shan-Gri-La Prehistoric Park" on the doors. Luckily for Springer, his neighborhood has no home owners' association and thus no rules against giant dinosaur sculptures living on your front yard! 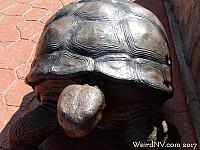 Large turtles stand in each corner of the driveway. 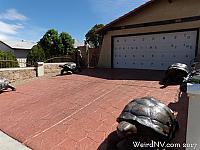 A welcoming garage at the Dinosaur House! 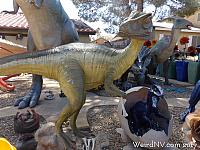