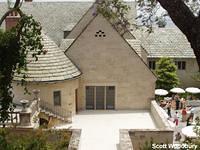 Greystone Mansion is a sprawling 55 room, 46,000 square foot mansion built in 1928 on 18 acres of land. The mansion took three years and 3.1 million dollars to build. It was built by Ned Doheny on land given to him by his father, oil man, Edward Doheny. The land was given to Ned as a wedding present in 1915 when he married Lucy Smith.

The mansion has a bowling alley, two movie theaters, a billiard room, a library, and several secret bars because the mansion was build during the Prohibition.

On February 16, 1929, about six months after moving into the mansion, Ned was apparently shot by his secretary, Hugh Plunkett, who then committed suicide. Supposedly in the months before the murder-suicide, Plunkett had divorced his wife, and had been acting erratic. He was apparently on medication and there were even talks amongst his doctors of sending him to a sanitarium.

Of course, when murder suicide happens especially with the rich, rumors and questions arise. Questions around Ned and Hugh's actual relationship of course arouse, as did questions about Hugh's mental stability. And of course there were questions about staging the scene, moving the bodies, incriminating Hugh, delaying in calling the police, etc.

Ned's wife continued to live in the house until 1954 at which point, her and her current husband built a 35 room house near Greystone. Greystone was acquired by the city of Beverly Hills in 1964 and now only the supposed ghosts live in it. Despite the dead residents, the mansion has been used in several movies and television shows over the decades including Airforce One, Ghostbusters, X-Men, The Big Lebowski and What Women Want. As to if ghosts wander the halls with unfinished business, or if Ned is trying to inform us as to what actually happened that night, well that's all left up to speculation. Regardless the current caretakers refuse to speak about the ghostly residents.