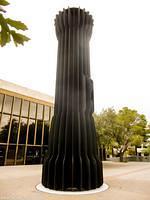 University of Nevada, Las Vegas plays host to a giant flashlight! Erected March 11th, 1981, the flashlight is black in color, thirty eight feet tall, ten feet in diameter, and weighs in at 74,000 pounds! It is made of twenty four black steel fins painted with polyurethane enamel. Each fin is welded at fifteen degree intervals. Shockingly for Vegas, there is no giant beam of light emitting from the steel flashlight, as it's pointing down into the ground. At night, however, a circle of light can be seen around the lens of the flashlight, imitating a real flashlight turned upside down. The circle of light is made by 24 fluorescent tubes buried in a well and covered with frosted plastic.

The Flashlight on the college campus is a product of Claes Oldenburg and Coosje van Bruggen, two artists who are well known for making giant sized sculptures of common everyday objects. Examples of other such sculptures include giant shuttle cocks in Kansas City and a giant safety pin in San Francisco.

Oldenburg decided on the flashlight because of the sculpture's location near a theater and concert hall. The flashlight is a tool used by ushers to help the audience to their seats. Oldenburg also felt that Las Vegas was a "beacon of light in the desert" and thus a flashlight "seemed to be the proper symbol". His wife, Van Bruggen, however, thought having the flashlight turned up, and thus having light shining up into the sky was "cliched and reminiscent of authoritarian spectacle" and thus the flashlight was instead turned around with its lens facing into the ground. Urban legend around campus, of course, states that nearby McCarran Airport objected to the flashlight beaming up into the sky and that this is the reason why it was turned upside down, but this is incorrect.

Oldenburg was commissioned for the piece at UNLV by art professor, Tom Holder. A North Haven, Connecticut foundry named Lippincott Inc built the giant black flashlight before having it driven to Las Vegas on a flat bed truck. According to the truck driver, he suffered from multiple CB calls on his radio while transporting the giant black object.

It can be found between the Artemus W. Ham Concert Hall and the Judy Bayley Theatre. Enter the campus on Cottage Grove Avenue and make the first left. You will see the Giant Flashlight ahead of you atop some stairs. 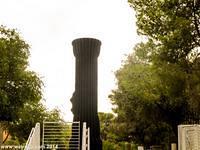 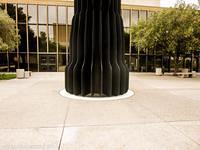 Base of the Giant Flashlight 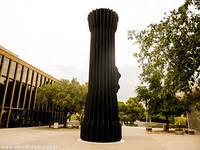 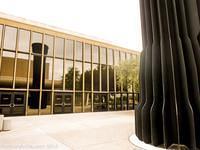 Reflection of the Giant Flashlight