At one point there were giant oranges lurking along many of the highways throughout California. These giant oranges operated as juice stands, eagerly awaiting thirsty travelers to pull over and partake of their fresh cold orange juice. At a time when most cars didn't have air conditioning and the highways were not the super fast freeways with on and off ramps of today, the orange stands did a busy and successful business.

In 1926 Frank E. Pohl started his chain of "Giant Orange" stands opening up his first orange shaped stand on what was 11th Street near E Street in Tracy. Before trying out orange juice stands, Pohl had a giant lemon from which he served lemonade in Menlo Park called Jumbo Lemon Stand. But his first "Giant Orange" was in Tracy, California and spawned a franchise and imitations throughout California. The franchise peaked in the 1950's with approximately 16 different stands built throughout Northern California from Bakersfield to Sacramento to Merced and Redding. It's rumored that a stand could easily go through six thousand oranges during a week as it quenched the thirst of weary travelers who pulled over for a quick drink.

There were giant oranges in at least Tracy, Dixon, Bakersfield, Tulare, Madera, Chowhcilla, Merced, Turlock, Redding, Galt, Roseville, Sacramento, El Dorado, Banta, Vacaville, Modesto, Lodi, Williams, Patterson, and Placerville. And some of those cities such as Tracy and Dixon had two giant oranges! Paso Robles additionally had a giant orange located on Spring Street that lasted until at least the 1950s. The girls who worked at it wore roller skates.

Giant Orange Stands were so popular that in the 1930s there was even a small war in Tracy between Frank Pohl's giant orange (on the north side of 11th Street near E Street) and a copy cat establishment called The Orange Basket (located on E 11th Street). The Orange Basket opened in 1934 right next to Tracy High School. In 1935 Pohl filed a lawsuit claiming that the Orange Basket was stealing his Giant Orange trade name and confusing customers. Of course, the lawsuit was thrown out, the judge stating that you can't claim sole use of the word "orange". The Appeals Court upheld the decision. The Orange Basket was open until 1966, when it burned down, catching fire from a lit cigarette. It was called "Jack's" in the end. The property it sat upon was incorporated into Tracy High School, somewhat fitting since much of its clientele were high school students.

After the 1950's the stands began to decline as roads were converted to higher speed freeways which made it more difficult to easily pull over and stop for a glass of orange juice. This combined with the emergence of air conditioning in cars, began the decline of the giant orange juice stands.

There are still at least two of the Frank E. Pohl's sixteen original orange stands remaining. The first stands in Dixon, California and until a few years ago operated as a Mexican restaurant. It was called George's Orange and was part of the restaurant, Mr. Taco. During this time period the orange had a very interesting paint job consisting of images of mustached gentleman in sombreros. Thanks to Tim Brown we have several pictures of this historic orange from that time. Sadly, the restaurant then closed and was been listed for sale for awhile.

In 2015, the entire structure, orange included, was repainted, so the orange now has a fresh coat of orange paint on it. After sitting vacant for many years, on October 18th, 2020, it was relocated two and a half miles away to the Dixon May Fairgrounds, where it will be put on display there and thankfully preserved. I am not currently sure where on the fairgrounds it will be located. It's original location was 2635 West A Street in Dixon (Dixon Avenue Exit off of Highway 80).

This orange is also notable as it was operated as an orange juice stand all the way until July 15th, 1973 and was the last of the giant orange stands to remain in business.

The other Frank E. Pohl orange remaining is in San Jose. Originally located at 1920 Alum Rock Ave, this orange was relocated in order to make room for a housing development. After being declared a historical city landmark the historic building was moved to 48 South Capitol Avenue. Today and since 1947, the orange has been utilized by Mark's Hot Dogs. Mark's Hot Dogs originally opened in 1936 and relocated to the orange in 1947. The business was started by Mark Yuram. As far as I can tell the orange was also constructed in 1936, and was placed on the original Alum Rock Avenue site in 1947 when Mark's Hot Dogs moved into it. It became a city landmark in 1992. The current owner is Demos Pantelides.

The Giant Orange in San Jose

Visiting the hot dog eatery is a fun experience. The inside of the orange is all restored and painted with orange tiles. Two stools are situated so you can actually eat at the counter inside the orange. Since that's obviously not enough seating, there are four large tables outside the orange, as well as some out door counter space with attached stools. And if that still isn't enough, they provide car service, both taking your order and bringing it out to you while you remain in the comfort of your automobile.

In Berkeley is a privately owned giant orange. Owned by architect Bruce Dodd, he located this giant orange being used as a chicken coop up near Corcoran. He had it extensively restored to the shining example now residing on his property. Dodd now uses it to entertain, enjoying playing with his grandchildren in it. It was not the first giant orange he attempted to purchase, however. The first was an orange located near Chowchilla. Sadly, the night before it was to be transported to his home in Berkeley it caught on fire and burned down.

The Giant Orange is located on Spruce Street and can be seen from the top of the driveway. I sadly did not get to meet Bruce Dodd or see the giant orange up close, as right as I pulled up, my baby daughter passed out on me. A few houses further north on Spruce Street, on the other side from Dodd's house, several large and colorful statues also exist. I am not sure what their story is, however.

Looking down the driveway at the Berkeley Orange

Besides Frank E. Pohl's orange chain, several other giant oranges sprung up along Route 66. At one point, much like Pohl's chain which spread throughout Northern California, the orange producers of Southern California in order to gain supplemental income, opened their own orange stands along this historic route. One remains standing. This one is Bono's Historic Orange Stand.

It belongs to Bono's, the Italian restaurant to the left of the orange stand. Bono's originally opened in 1936 in order to add supplemental income to the family's orange grove business, but is now currently closed after the original Bono family passed away. The current generation has so far not done anything with the restaurant nor with the old orange stand. In fact from the windows it still looks like it did the day it was closed, complete with table settings laid out. Other than that, a Historic Route 66 interstate sign is spray painted on the pavement just to the left of the stand. Hopefully one day this large orange will once again be a popular destination for food and drink.

Along 198, just north of Lemon Cove, on the way to Yosemite, there is another giant orange. Referred to as The Big Orange, it is part of the Mesa Verde Ranch and is actually attached to an existing fruit stand. At the time we stopped by, although it was not selling orange juice, it was actually selling oranges and other fruit. The giant orange appears built into the building, being part of the corner. Heading southwest from Lemon Cove along 198 you will additionally run across the giant carved wooden head of John Muir.

Inside the Giant Orange

Believed to have been built in the 1940s, also by Frank E. Pohl, it started in Chowchilla before being relocated to Fairmead in 1954 along the east side of Route 99. It was called the "Mammoth Orange". This giant orange was located around 22150 Avenue 22 1/2. Sadly in 2008, changes to the highway made it impossible to get to it. It was originally located at an intersection on the highway, where you could actually cross the highway. In 2008, this intersection was eliminated in order to make the highway safer, as the state was removing all such intersections along Highway 99, with the nearest offramp from being about a half mile away from the orange.

The Mammoth Orange remained in its location for four years, slowly deteriorating before finally in 2012 it was relocated back to Chowchilla outside the Fossil Discovery Center. It has sat there in the parking lot awaiting restoration with current plans being to use it as a concession stand for the center. It is open in the back and use to be attached to a building when it was on Highway 99. The building on Highway 99 is now gone as well.

Nearby, on the west side of Highway 99 was another giant orange. Called Fast Eddies Mammoth Orange, at one time it was owned by the same people who owned the other Mammoth Orange. By at least 1991 the stand was closed and it was demolished in the mid 1990s. At the time of its closure it sported a blue and white paint scheme with blue and white stars.

Joe's Giant Orange Cafe in Shasta Lake inhabits another one of these old historical giant oranges. Built in 1946, this is an original Frank Pohl orange and was originally located in Redding on Highway 99. Now, Joe's is a mix of American and Mexican food and if reviews are true one of the best places to eat in all of Shasta Lake. They apparently also serve excellent orange drinks like an orange shake.

Outside the California Citrus State Historical Park lies a replica of giant orange stand. Located at the corner of Van Buren Boulevard and Dufferin Avenue, the replica welcomes visitors to a state park consisting of 377 acres. The state park, established in August 1993 has 87 different varieties of citrus. A visitor center and museum is located in the park along with trails, picnic areas, an outdoor amphitheater, and large gazebo. Most importantly there are 186 acres of citrus groves and visitors will literally drive down roads lined with what appears to be endless rows of orange trees.

Replica of a giant orange stand in Riverside

Replica of a giant orange stand in Riverside

Groves of oranges in Riverside

Additionally there have been sightings of other giant oranges throughout California. These are not just possibly former Pohl Giant Orange Stands, but a whole host of differing competitors. Some have seen better days, where as others have recently found new life. A complete list of all giant oranges that we know of in California includes: 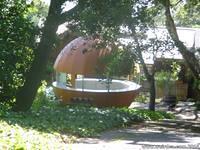 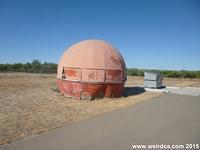 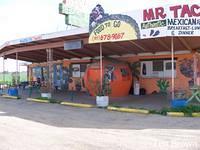 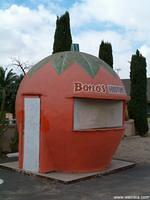 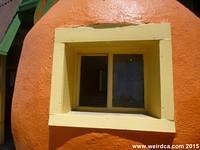 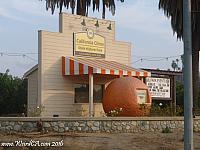 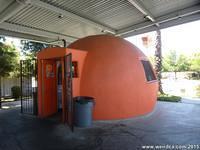 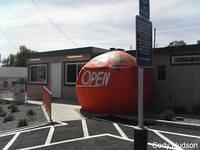