On Fremont Street in the 900 block between 9th and 10th streets, across from Atomic Liquors, sits a strange parking lot with a very peculiar restored sign and llamas, lots of llamas. The sign has a large letter A in a circle at the top, with "Motel" written vertically down it. Near the bottom of the word motel is the cryptic saying, "Llamas Stay for Free", which is above a joke that changes.

Llamas at base of lights 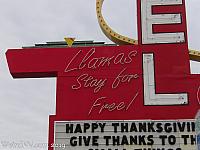 The sign which at one point had Jackie's name smudged out was completely restored in 2013, only the entire area where "Jackie Gaughan's Ambassador East" was located has been replaced with the phrase "Llamas Stay for Free". The llamas part is in honor of Zappos CEO Tony Hsieh, whose favorite animal is the llama. Hsieh had relocated Zappos office building to the downtown area of Las Vegas, and invested a lot of money into invigorating the area. The sign often has a joke written on it, the joke changing often. The bases of the light poles are painted with a variety of llamas and have little people climbing up near the top. The pay machines for the parking lot are also covered in llamas. The neon sign lights up at night, complete with a "No Vacancy" sign. 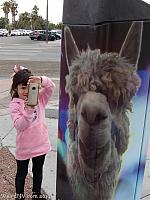 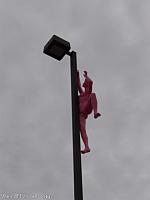 Top of the Light Poles 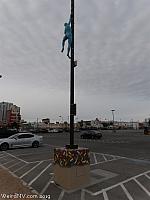 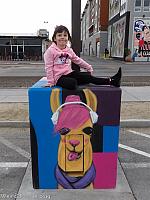 Tiffany sitting on a Llama

The Llama Parking lot is across the street from Atomic Liquors as well as a giant fire hydrant. There are also some very colorful murals spread around the neighborhood.